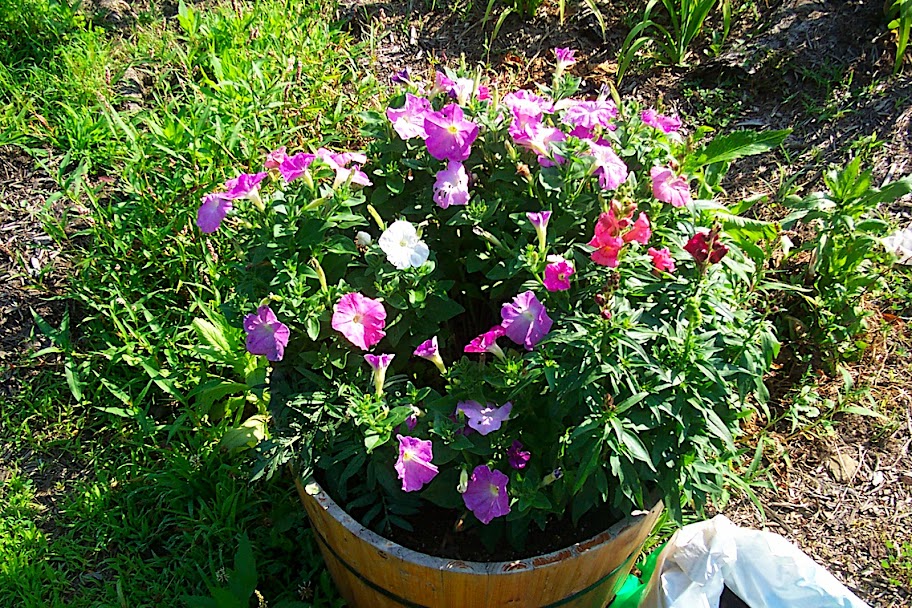 There are more pictures of my garden here: Garden Mid-July 2008.

The flowers are doing well, despite not having much company or attention this year. The veggies are doing very well. I have several proto-squash and baby pumpkins on the vines already. One of the stalks of corn was sprouting tassles this afternoon. I even got to eat one of my yellow squash for dinner tonight.

The Japanese Beetles are out in full-freakin-force now, too. They are decimating the crab-apple tree and are into the string beans, just like last year. But, I set out some traps and, if last year is an indication, most of the plants will survive the dumb little buggers.

Two of my squash aren't doing so well. One is a fancy squash I've never grown before, and it was a major pain to get the seeds to germinate in the first place. It seems to have some kind of disease on its stem where it touches the ground. It may or may not make it. The other is a yellow squash or zucchini plant (I'm not sure which it is). It's got white stuff on its leaves that I assume is powdery mildew since I had that on some squash last year. There are 4 other squash/zucchini plants, so I think I'll have enough.

There are also two baby honeydew melons on the vines. This is the first year I've grown those, so I'm excited to see the fruits. With luck, they'll ripen just before our trip to Michigan and I can share them with my mom and she'll be so impressed (she's a mother; it's her job to be impressed :).

Other than putting down grass for mulch, I've been seriously slacking on weeding or other garden chores. But, it's not a fun hobby if you take it too seriously. :)
Posted by Unknown at 02:07 No comments:

Rain is good for the garden

I have some pictures of the garden here: Garden Early July 2008

It's coming along quite well. The rain has been good for the grass and weeds in the garden as well as for the squash, corn, et al. I chopped some of it with a weed wacker, some with hedge clippers this past weekend, until the rain started up again.

I don't know if it's too late to plant more of the corn that only got 10-20% germination or not. I guess the only thing I lose by not trying are the seeds. But, if they don't turn into corn, I'll at least have corn stalks for decoration in the fall. :)

Next year: tiller, for sure.
Posted by Unknown at 02:27 No comments: