It took most of the week for me to recover from the terrible cold I had last weekend.  Some of my symptoms are surely allergies, too.  Pollen is everywhere and the mold is going crazy.  It has rained for most of the last four days. 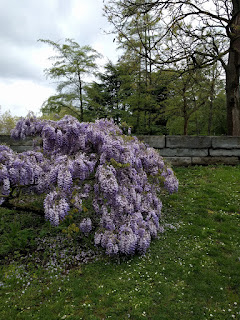 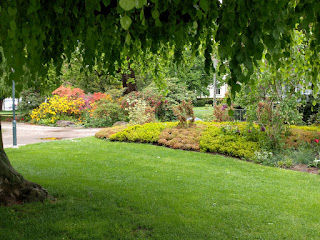 I got to experience Swiss pharmacies to get more Allegra.  Almost everything is behind the counter and you have to ask for it.  Only things like skin creams were out in the open.  I didn't even see bandages or Neosporin in the unguarded section of the store.  I think that's the most foreign experience I've had so far.

The rain was good for the flowers, though.  Here are some of the blooming plants we saw on a walk through a park. 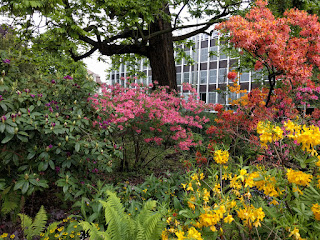 We were warned that brunch isn't really a thing yet in Zürich, but that a few places served it.  Saturday morning, we slept in and decided to try to find a place.  We ended up at Iriquois and had a lovely brunch.

We also made a few more dishes at home, including a meat and veggie sauce for spaghetti and roasted potatoes and sausage.  We also had a frozen pizza that looked like sausage.  We got it home before we translated it -- it was tuna pizza.  It was odd, but not terrible.  I think a fresh version would be quite tasty.


Finally, since it's spring, we also got some rhubarb and I made a compote for putting on ice cream.  No pictures of that because anything made with rhubarb just looks nasty. :)
Posted by Unknown at 16:50