We don't have a Geiger counter, do we?

I recently came back from a trip to my mom's house.  While I was there, she gave me a mixing bowl that had been my grandmother's.  It's a pale milky green. 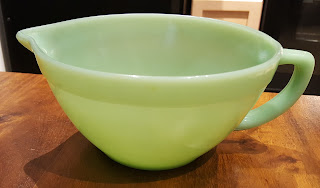 When I showed it to my husband, he said, "we don't have a Geiger counter, do we?"

Back in the 1920s, it was popular to mix Uranium oxide with glass to give it a slight green color.  At the time, this was called vaseline glass.  Now we call it Uranium glass.

The color of the glass could have been Uranium glass, so I got my hands on a small, fairly sensitive Geiger counter.  (My coworkers have an amazing array of weird stuff.) 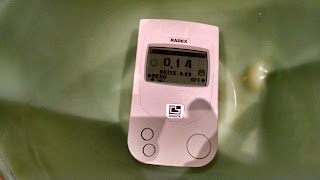 The levels reported were the same as background radiation in the apartment.  I also tested it with a black light, just in case the Geiger counter wasn't sufficiently sensitive.

The bowl turns out not to be Uranium glass but FireKing Jadeite.  That's not as rare as Uranium glass, but it's also not radioactive.  I consider that to be a fair trade off.