[Sunday in Switzerland] A holiday weekend and a bread experiment

This weekend is a holiday weekend since Monday is Swiss National Day.  Established in 1994, it celebrates the Federal charter of 1291, what is seen as the pact that formed Switzerland.

I asked my coworkers how Swiss National Day was celebrated.  They said "with fireworks and grilling with friends" or "like the Fourth of July".  I asked if there were parades and was told "no", but this page describing the Zurich events says there will be a parade.  I will let you know next week if and how the parade goes.

Today we avoided the rain and stayed inside.  I made a Butterzopf.  I made one from a mix, but it was very tasty, so I see no pressing need to try a recipe from scratch.  Here is the package with a picture of what it's supposed to look like and what mine looked like. 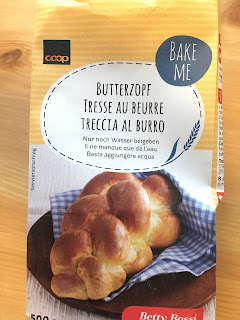 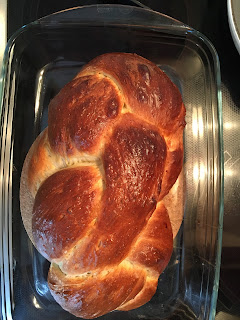 This fountain is in a nearby park.  We have seen at least one dog hop right in on a hot day. 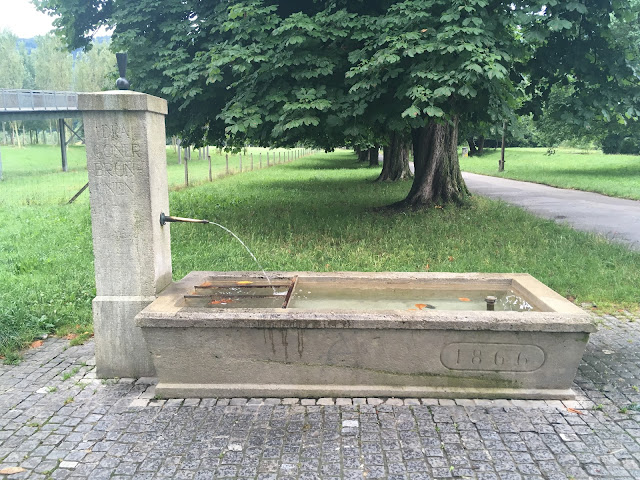 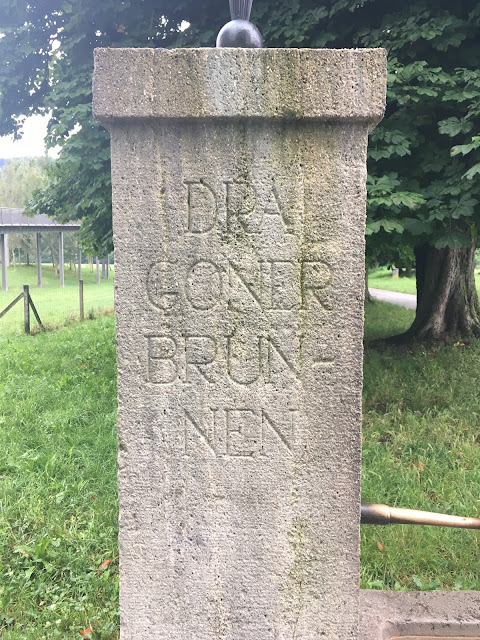 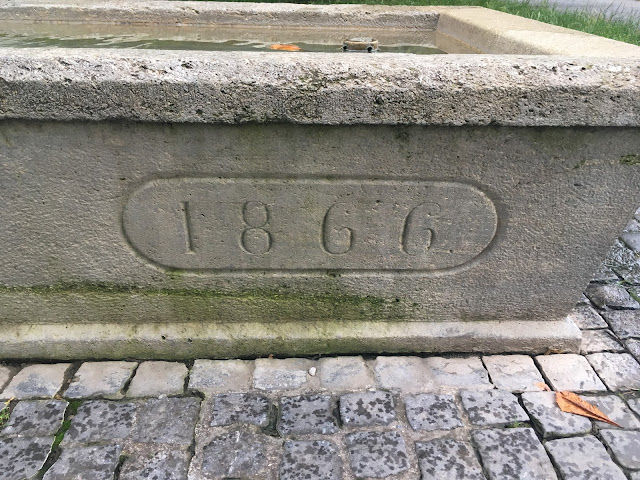 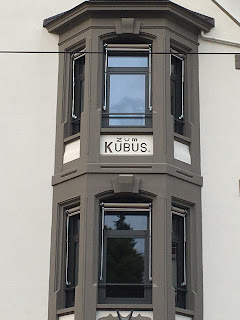 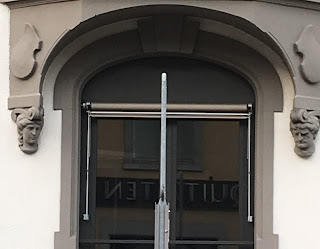 [Sunday in Switzerland] Curtains and windows

We continue to settle into our apartment.  I have the new experience of assembling an Ikea sofa.  Who knew it also came in "flat pack" boxes?

But curtains were their own special disaster.  We found some and we puzzled through it, but it was weird.

First, let me say that curtains may not be required, depending on your tastes.  Almost all windows come with either working shutters or roll-top, external blinds.
If you're willing to cope with raising and lowering the blinds every day, you can get away with just those blinds.  The mechanism to control them varies from manual, like ours, to remote-controlled high tech blinds we saw in some apartments we looked at.
But, if you want actual curtains, you have to figure out how to attach them.  I was going to rant that curtains were so complicated here and why aren't they as simple as in the U.S.  Then I started iterating the kinds of curtain attachment systems in the U.S. and gave up the rant.

In the U.S. you get some kind of curtain rod.  The kinds I've encountered are:


Then you buy curtains that fit over that rod.  Simple!

Here you have to first see if you have built-in curtain rails.  These were in many, if not most, of the apartments we looked at.
Problem solved!  Except when it isn't.  There are two different sizes of rail (that we've seen hooks for), mini and maxi.  Then you have to choose the length of the small hook that comes down from the rail rider.
Once you attach the hooks to the curtain, which varies by the kind of curtain you bought, then you slide the plastic tabs onto the curtain rails.  There are little access points at one end of the curtain rails to permit the sliders.
We have not yet discovered if there's a standard way to keep curtain hooks from falling out of these access points.  Instead, we're just pushing the curtain to the other end of the window when we need to get them out of the way.

Some apartments don't have this mechanism.  Or, if Ikea catalogs are to be believed, some people use the curtain rod mounted outside the window well approach.  The curtain rod users have as many confusing attachment options as in the U.S., but the rail approach was new to me.

Also, we haven't tried to hem the curtains yet.  The ones we bought so far come with some seam tape that you can use to shorten the curtains with just a clothes iron.  I haven't tried that or sewing them yet, but I'm sure that will be its own story.
Posted by Unknown at 17:15 No comments:

There are fountains in Zürich that have drinkable water.  There is even an entire blog dedicated to finding and documenting all 1200+ fountains.  I won't get them all, I'm sure, but there are some lovely ones on my walks and this is a short series to share them.

This one has a shelf for kids to stand on and on the other side a lower pool of water for dogs. 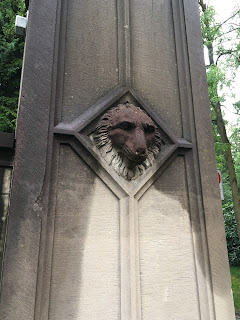 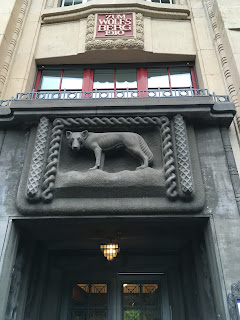 [Sunday in Switzerland] A walk in the park, a duck, and a movie

This morning I went for a long walk in one of the parks near my house.  I took a trail near the river and decided to see how far it went.  I had to turn around before I reached the end.  I was told there were a lot of trails in Zürich, but I had no idea.


There are these dog poop bag dispensers around the parks here.  They always seem like they're cheering on the dogs for pooping.  "Bravo, Fido!  Way to poop!"

After brunch, I wanted to go see a movie.  I went to the local shopping mall, Sihlcity, named after the Sihl river.  One side of the shopping mall has large, safe steps leading down to the river for people to get down to the water and play.  I had some time to kill, so I took of my shoes to put my feet in.  Ow, how cold!  It was like Lake Michigan in early Spring.  Yow.  After a while, I got used to it, but it was much colder and faster than I expected.

A duck left the river to come sit near me.  I told her in both English and German that I had no bread, but she just wanted to nap. 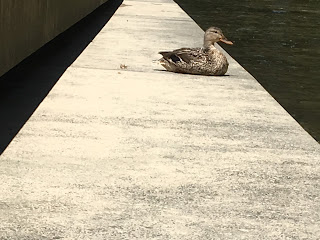 I went to see Independence Day: Resurgence.  It was just as bad as I expected, but there were lots of good exploding scenes.  It was my first experience with Swiss theaters.  The movies are listed by the languages they're in, spoken and subtitled.  For example, mine was "E/d,f" for "English" being the spoken language, "Deutsch" and "Français" being the subtitled languages.

The popcorn stand was off to one side, less obtrusive than in US theaters and the selection was smaller.  It was still crazy priced: 5 CHF for a bottle of water.  The seats were nice and Sunday afternoon is a quiet time to see a movie, if today was any indication.  Of course, the movie started on time.  There were fifteen minutes of previews.

And then there's intermission.  I was glad someone warned me before I went to a theater, or I would have been seriously confused.  Halfway through the movie, they turn off the movie, bring up the house lights, and start background music again.  People get up and leave the theater like it's nothing.  No indication on the screen that it's intermission.  I got a chance to use the toilet and get another bottle of water, though, so I think it's genius.

So that was today.  A busy day of exploring and relaxing with ducks and movies.

[Graven images] Faces and a lion

In this spot, I would usually post a "Used to be" picture of something.  I fully intended to continue that series in Zürich.  However, those buildings are not nearly as common here.  Things are either still what they are engraved to be, or the whole building was removed, or there were never words to begin with.  Instead, there are a lot of engraved people, birds, and other things.

So, we begin.  These are some faces and a lion from the Swiss Re Principal Investments Company. 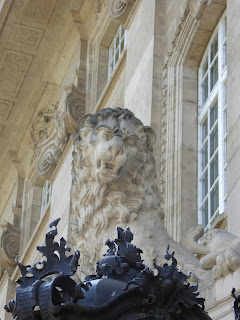 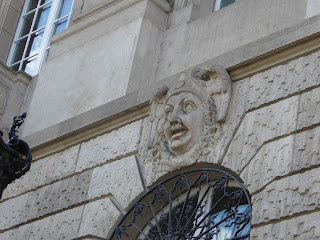 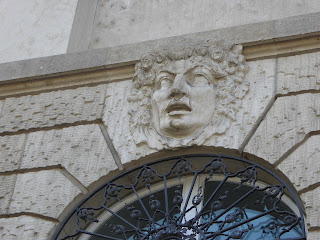 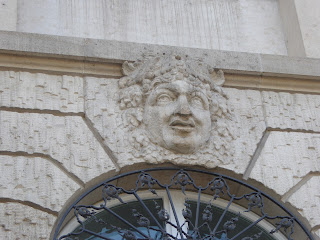 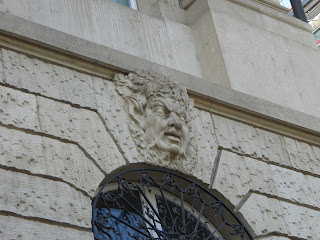 [Sunday in Switzerland] Furniture, art, and a walk in the park

We got a big delivery of Ikea furniture last week.  We spent Friday night and most of Saturday assembling it.  We're still not done.  I had been marveling at how amazing Ikea was at getting all the right parts together.  Then I got to a big dresser and the rails just didn't line up with the holes.  Not getting this one together was not my fault. 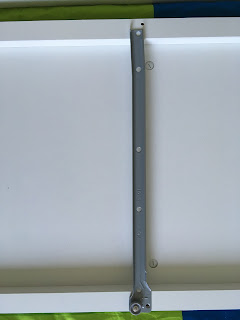 At a local shopping mall, there was a strange moving thing I noticed when we were getting dinner one night.  It looked for all the world like a briefcase collecting water and then moving around in a circle, slowly, leaking that water before coming back to get more water.

That was so odd, I couldn't believe that's really what it was.  We theorized it was a water disbursement system for the air conditioners in the shopping mall, albeit a very elaborate one.  A few days later, I noticed the sign explaining it.  It's art.  Weird art, but art. 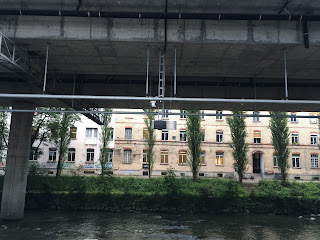 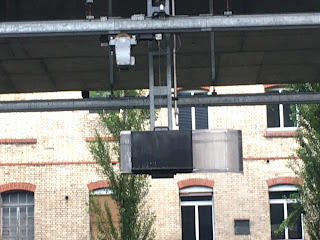 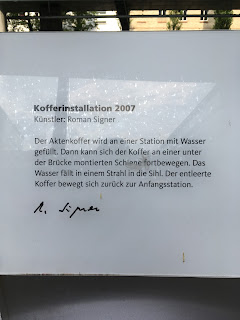 It has finally been sunny.  We went for a walk in the park today and enjoyed the fresh air, sunshine, and many dogs.  There was also this fabulous sign for a nature reserve that kind of looks like an owl or a monster perched on the leaves.  "Monster forest this way," I imagined. 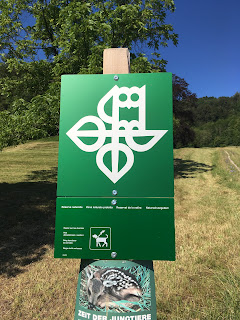 This YMCA is now the Ace Hotel in Pittsburgh.  We stayed there our last week in the 'burgh. 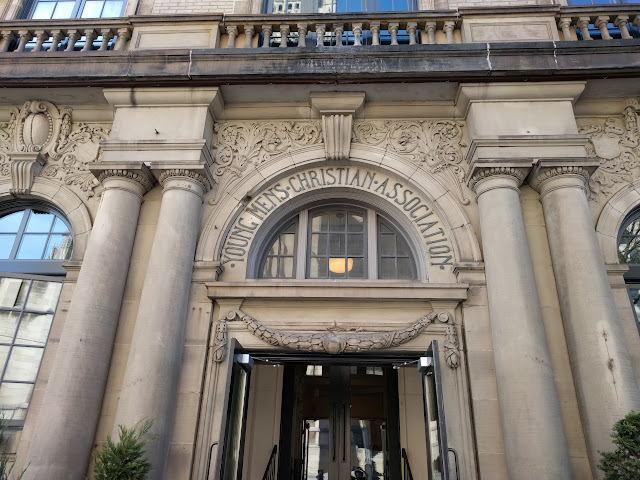 [Sunday in Switzerland] Ikea and trains

We successfully navigated the apartment hand-over process.  There was more drama than was strictly necessary, but we're in the new place now.

We're in the new place with zero furniture.

Fortunately, there is an Ikea close to a train station.  It's still not easy, but it is possible to buy rolled up mattresses from Ikea and hulk them from bus and over two train rides to get them home.
Other furniture we'll have delivered and pay the price for someone with a truck to bring it to us.

The trains here are wonderful.  Beyond having space enough for us to lug home two mattresses, they run ridiculously often.  The longest we've had to wait was 20 minutes for the most direct route.   Shorter waits were available, but less direct.  Usually, it's less than a 10 minute wait for the train we want.
Posted by Unknown at 16:50 No comments: