This was a busy week!  Last Monday, August 1, was Swiss National Day.  It was a holiday from work, so we slept in.

Or so we thought!

We had a slow breakfast then wandered down to see the parade.  It was short and sedate by Fourth of July parades, but it had groups in traditional Swiss dress and, I kid you not, a group of marching Alphorn players.  If you haven't seen an Alphorn in person, they are quite large.  To play in a marching band, they stopped periodically and set the horns down and played a few bars before picking them back up and hoisting them over their shoulders.  It was quite a sight to see.

The parade was followed by a reading of the 1291 Proclamation.  Since it was in German, we wandered around the food and beer stalls from various nearby cantons.  We had some tasty treats and a beer that even Untappd didn't know about.  We also had a cheese, radish, and scallion bread that I thought was familiar.  Willie reminded me that we've had it at the Hoffbrauhaus in Pittsburgh.  I can't find the name of it, but I'll be sure to have it when I'm there again and compare. :) 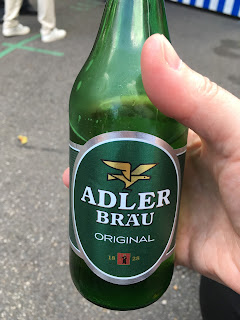 In order to encourage recycling, there was a 2 CHF deposit on the beer bottle.  I took it and plastic token back to where I bought the beer to get the 2 CHF back.

Then on Saturday, we wanted to break our routine and go to another city in Switzerland.  So we took a train for a whole hour (!) to Luzern.  We wandered around, saw some monuments, old churches, and took in the sights.  We didn't go to any museums because it was a beautiful day and we wanted to get a feel for the city.  Next time, for sure.

Pictures of Luzern were too many to put here, so I made an album of Luzern pictures.