Zermatt is what I have come to expect from very touristy Swiss towns. Everything functions well, but lines are unavoidable because of the huge fluctuations in people at any given time. And when I say lines, I mean a meandering mosh pit that eventually coalesces into lines. 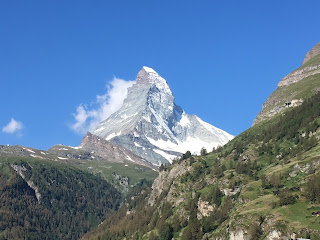 If you're not familiar with it, the village of Zermatt is near the Matterhorn, the iconic mountain in the Swiss Alps. Zermatt has an elevation of 1600 meters, making it almost exactly as high as Denver, Colorado. It is packed with the usual assortment of Swiss luxury brands in shops. (I don’t know who buys a 15,000 CHF watch in a small village, but they’re available.) It was entirely possible to get to Zermatt by public transport.

The Luftseilbahn (gondola or cable car) up the mountain has several stops. The “middle” stop is at 3000 meters above sea level, making it higher than Rocky Mountain National Park, but not as high as some of the peaks. There is a second leg of the cable cars (which I didn’t take) that goes to “Glacier Paradise”. There were signs for "Italy", implying that it was possible to transit the Swiss Alps completely by cable car and arrive in the Italian Alps.

The Matterhorn's peak is at 4,478 meters, well above the 3000 meter “middle” stop. The terrain at 3000 meters, even in high summer, is cold and mostly lifeless. It looks barren and alien. Beautiful in it’s starkness, and exotic from the warm summer day below. 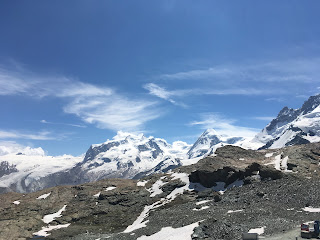 We also visited the town of List on the island of Sylt in northern Germany. Sylt is an island on the North Sea, with sand dunes, sea gulls, and tide pools. It is at least as tourist focused as Zermatt, with boat tours and a Pirate themed restaurant (that was actually pretty good). There are no lines because there is no single attraction. Or rather, the one attraction (the sea) is big enough that people dissipate to the various beaches and bike paths through the dunes. 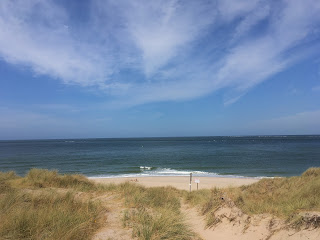 On the island of Sylt, there were shops selling high-end watches, bags, and clothes, but they were far less common than those selling beach and tourist trinkets, like rulers with your name on them, big floppy straw hats, beach towels and bags, and so on. It was possible to navigate the island by public transport, but cars were a lot more common.

The beaches are marked where you can use them and the ecosystem of the dunes is being preserved. In the water, there are crabs and small fish at low tide, as well as clams and other shellfish. Plentiful, too, are the sea gulls and terns, and Eurasian Oyster Catchers with their striking black and white plumage and orange bill and legs. They scurry along the water’s edge, stabbing their long bills at their prey, and carrying their catch back to their rooftop nests.

Where high in the Alps the terrain felt lifeless, the seaside is alive, but somehow paused for the summer. The dune grasses are brown and the sea roses have gone to their bright red fruit. The few trees here are stubby pine, some ornamental olives, and a few others. The plants give the sense that they are waiting for the summer heat and dry to abate before they make their next big change. 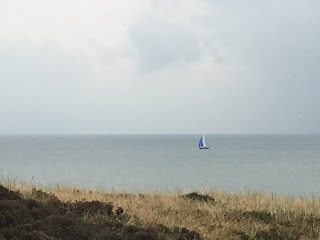 Adventure sports were alive and well in both locations. In Zermatt, you could get a paragliding session. In List, you could learn to surf or to do stand-up paddle boarding.

The roofs were unique and interesting in both towns. In Zermatt, buildings were roofed in large pieces of slate, arranged as diamonds, with the points down toward the eaves. Newer houses used a kind of synthetic slate made to match the look. In List, buildings were roofed in a kind of thatching made of long round reeds of some kind. They were trimmed and tidy; I saw a new thatched roof being installed, so the art is alive and well.

Another difference is language. In Zermatt, you were as likely to hear Mandarin, French, or English as you were German (High or Swiss). In List, German is everywhere. Because I am learning High German, I was able to understand a lot more of what is said in List than I might in a random Swiss city. But, in Switzerland most shopkeepers and restaurant folks speak English. Here, if my German fails me, it’s even odds if they will be able to fallback to English or if Google Translate will have to save me. In a town of this size, with mostly German and Swiss tourists, it makes sense. We did hear at least a few other American and British couples, but it was far less frequent than we heard English in Zermatt.

Two extremes of climate for two vacations. Being so close together in time, the differences were even more striking.  Album with more photos here.
Posted by Unknown at 16:01 No comments: